Eating vegan, running long distances and being 20-something.

Now, onto my favorites for this month…

Some may say turtlenecks are nerdy, but I love them. It’s like having a scarf on 24/7 without actually having a scarf on. Perfect for someone like me who is constantly cold. I keep buying new ones and I ain’t stoppin’!!

This is an HBO show that is Girls-esque in that it features female protagonists, can make you feel uncomfortable at times, and is about being 20-something. However, it’s different in that it’s told from the black perspective and is more poignant (in my opinion). I love the aside raps (like a modern Shakespeare), and it’s a good mix of drama and comedy. The first season just ended and I’m super bummed… I really hope it gets renewed. 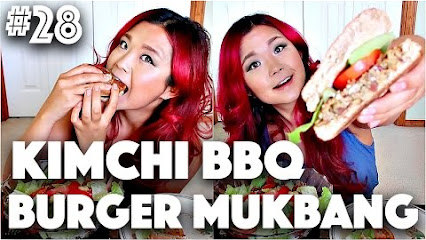 This is one of my favorite YouTube channels right now. Rose, the woman behind the channel, is a Korean-Canadian vegan who is super cute, funny, and has amazing hair and make up skills. She posts recipes, mukbangs, food hauls, and more. Check her out if you want food inspo and/or entertainment!

I’ve been following Katie for a while on Instagram, but I’ve been really digging on her blog lately. Katie is a running coach, ultra-runner, and pharmacist who resides in the South (I believe in North Carolina). She has the cutest Southern accent (irrelevant but still noteworthy), and I love her blog because her voice is nonjudgmental, insightful and conversational. She writes a lot about running, nutrition, and lifestyle. She writes new posts daily, so give it a read if you’re on the hunt for a new health/fitness blog to follow!

What. a. badass. This girl is Chinese but was born and raised in Germany, rocks bleach blonde hair, and has great style. On top of that, she is also super creative (her “what I eat in a day” videos are

unreal), brilliant, and relateable. Oh and she’s vegan. Can you tell I have a major girl crush?

I subscribed to her channel a while ago, but her recent video on how not to pick up Asian girls is what really made me fall in love with her. It’s hilarious, and all, especially minority, girls will relate.

Her teatime chats, what I eat in a day videos, and vlogs are all fantastic. Highly recommend!

I feel like I’ve tried all the different types of bread out there, but sourdough consistently comes out on top. No, it’s not as healthy as sprouted or whole-wheat bread, but it’s still pretty healthy, tastes better, and is cheaper than those classically healthy breads. Thus, the pros outweigh the cons for me.

What makes sourdough healthy (and yummy) is the fermentation that occurs in the process of making it. The fermentation makes the nutrients in the flour more digestible and helps with blood sugar control by making the simple sugars less available. It also produces lots of gut-friendly bacteria and anti-inflammatory properties. (I got this info from Greatist.)

Check out my past ‘things I love right now’ lists:

Have a great December! Keep warm :)

An embarrassingly late post about the most incredible donuts I’ve had in a while…. @boneshakerparis 😍🥰❤️‍🔥😘😻 who deserve all the heart-related emojis in the world. I’ve been dreaming about their goddamn donuts ever since I went (like a month ago lol)… ADD IT to your list and thank me later.
Last week in Paris. So much good vegan food!
Olá from Lisboa…! Had my first-ever vegan pastel de nata from @vegannata.pt 😍😍 Loved the flakiness of the pastry and the custard was delicious. Def going back for more.
What I eat in a day: *new* products only edition!! I mean, how else can you fit in all the new veganuary products….. 😆